The mission of AFA Action is to inform and mobilize individuals to strengthen the biblical foundations of America.

Chairwoman Ronna McDaniel's official tweet stated the GOP Party "will continue to grow our big tent by supporting measures that promote fairness and balance protections for LGBTQ Americans and those with deeply held religious beliefs." As if saying "Happy #PrideMonth" was not enough, the GOP committed to support LGBTQ "measures" in the future. 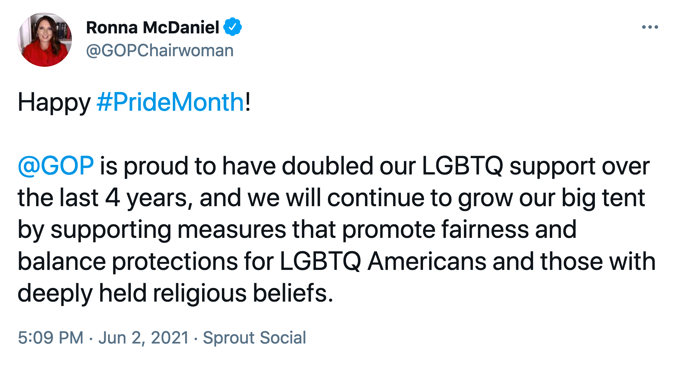 has nothing to do with individual rights; it has everything to do with power. They are determined to reshape our schools — and our entire society — to fit the mold of an ideology alien to America's history and traditions. Their edict to the states concerning restrooms, locker rooms, and other facilities is at once illegal, dangerous, and ignores privacy issues. We salute the several states which have filed suit against it (p. 35).

The LGBTQ agenda dilutes conservativism. The GOP leader's seemingly innocuous phrase, "to grow our big tent," likely refers to a national election strategy known as the Growth and Opportunity Project. This GOP project essentially tells conservatives and evangelicals that the Republican Party will have to dilute their longstanding views on social issues in order to regain and retain political power.

When it comes to social issues, the Party must in fact and deed be inclusive and welcoming. If we are not, we will limit our ability to attract young people and others, including many women, who agree with us on some but not all issues [like abortion].… For the GOP to appeal to younger voters, we do not have to agree on every issue, but we do need to make sure young people do not see the Party as totally intolerant of alternative points of view (Emphasis added).

McDaniel speaks of "balance" or compromise between the LGBTQ agenda and religious liberty, she is likely referring to the "Fairness for All Act." This so-called compromise legislation is neither biblical, constitutional, nor is it in alignment with the GOP platform. If enacted into law, business owners would be forced by the government to accommodate the LGBTQ agenda by providing products or services that violate their religious beliefs or face guaranteed federal prosecution.

The GOP Platform strongly opposes this agenda by declaring:

We oppose government discrimination against businesses or entities which decline to sell items or services to individuals for activities that go against their religious views about such activities. (p. 32)

Read AFA's blog for an expanded discussion on the GOP's celebration of LGBTQ "Pride."

Take Action Now. Sign the petition to GOP Chairwoman Ronna McDaniel and then call the GOP office at 202-863-8500 (Select prompt 1, then prompt 4) and leave a message that you will bypass the GOP and only give directly to candidates, not the Republican Party.

Fill out my online form.